Teodosio Magnoni, was born in Offanengo (Cremona) in 1934. He studied painting at the Carrara Academy of Art in Bergamo and mosaic at the Ravenna School. In 1959, after long stays in Switzerland, Spain and Sweden, he is in Rome where he intensely attends the artistic avant-gardes. At the beginning of the seventies he carried out research aimed at highlighting not the occupation but the emptying of space. it is in this phase of his research that the passage from painting to sculpture takes place. Since then he has been engaged in the theoretical elaboration and empirical realization of the concept of transforming space into place and of sculpture as a place in itself, alongside an intense reflection on the meaningful void. The artistic experience of Teodosio Magnoni crosses two fields of art that in the contemporary era have had more opportunities to contaminate and mix: painting and sculpture. The artist, an informal painter up to that moment and as such still in search of his own identity, is struck not so much by the kineticism of the objects and environments that are exhibited, but by the spatial involvement that that movement entails. The work of art has suddenly emerged from the two-dimensionality of traditional media and has begun to explore the space that surrounds it, involving it in a dimension that is almost suspended halfway between painting and sculpture, between image and body. In 1954 he took part in the Dalmine Prize. The first solo show was held in 1965 at the La Salita gallery in Rome. He participates in the Venice Biennale (1976, 1978), in the exhibition at the Karl Ernst Osthaus Museum in Hagen (1978), at the Rome Quadriennale (1986). He holds anthologies at the Palazzo dei Consoli in Gubbio (1987), in the city of Venzone (1992), at the Center for Contemporary Art in Umbertide (1996), at the Municipal Art Gallery of Cesena (2001). He has created large sculptures for the FAO Palace in Rome (1999), for the Museum of Contemporary Art in Maglione (Turin, 1999), for the Prison House, Rossano Calabro (2002) for the Fiumicino airport (2003). ), for the barracks of the Guardia di Finanza in Campobasso, for the Giovanni XXIII Gallery in Rome (2007), in Brufa (Perugia), for the Albornoz Museum in Spoleto. Since 1985 he has lived and worked in Sutri and Viterbo. He is a member of the National Academy of San Luca.

There are no reviews yet.

Mastro Giorgio is one of the oldest and most prestigious factories of traditional ceramic objects in Umbria, from the early 1900s Marsilio Biagioli became the protagonist of the production of dishes, vases, amphorae and other traditional ceramic products pulled on the lathe, with decorative and cooking, even in luster, completely hand-made with the artisan experience handed down over the years.
Traditional decorations have had significant moments since the 1940s thanks to the typical Gubbio floral design with cold patination, a decoration that is articulated in a composition of flowers and leaves on branches and arabesques of oriental derivation.
In the 1950s, after the war, the new factory called La Mastro Giorgio was reborn in Gubbio and the production was enriched with Renaissance and Baroque decorations with the introduction of blue, copper green and black backgrounds.
From the 1960s, shaped forms were introduced by developing the casting technique, the decorations expanded to historical and mythological subjects with dragons and griffins, garlands and baskets, with historical reinterpretation of images from the sixteenth century to the Neoclassical.
Since 1980, Mastro Giorgio has been producing panels, vases, amphorae and plates in Naif, Liberty and Contemporary styles with mythological and everyday subjects, and creates a line of artistic ceramic works with the collaboration of some important artists such as: Trubbiani, Nespolo, Brindisi, Schifano, Minguzzi, Monachesi, and others.
In the same period, the productions were enriched with objects for domestic use and for furnishing outdoor spaces.
Today the production of traditional ceramics La Mastro Giorgio is known and appreciated throughout the world for its quality and aesthetic value, the factory is considered a reference point for traditional Umbrian ceramics.

Byndee Luxury Marketplace provides you with a Personal Shopper who will follow you in your every purchase choice, recommending the products for your specific needs and requests.

If you need more information on this article write us here.

The love, care and attention with which you have chosen it, for sure, will be breathed and perceived within the environment you have furnished, you and your guests will be able to experience the emotion that the care of choice communicates of your furniture pieces. 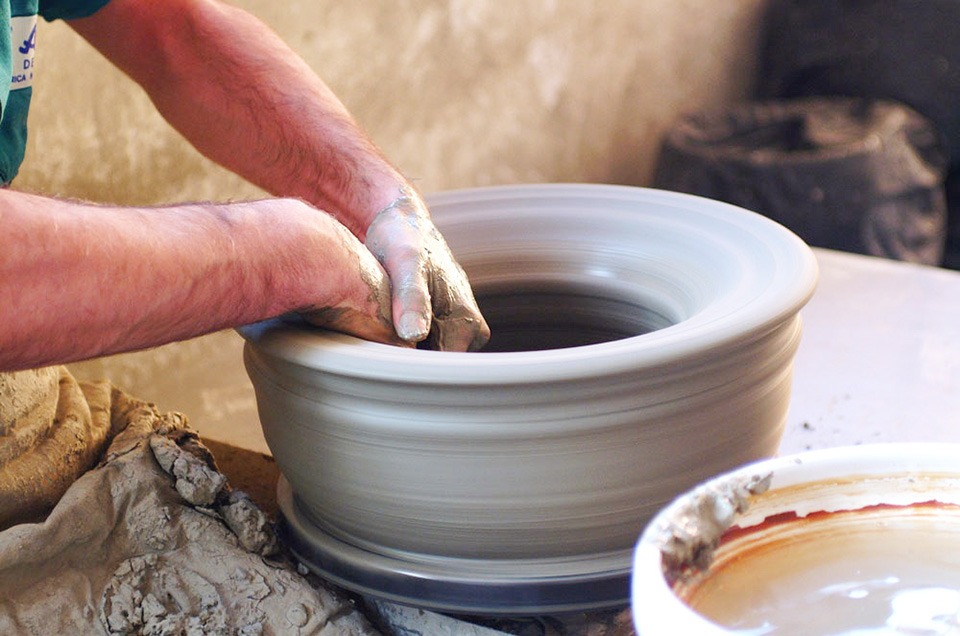 Deruta and its ceramics

The ceramics of Deruta have been the characteristic of this Umbrian town for centuries, already widespread since Roman times, and since the 1300s we have news

The value of traditional artistic ceramics

Among all the artisan activities of Gubbio, the one that reached levels of exceptional technical and formal expression was the production of objects in